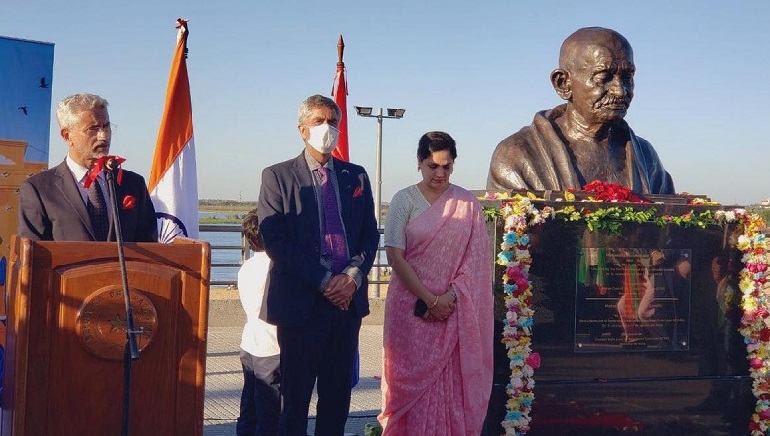 External Affairs Minister Dr S Jaishankar and UN Secretary-General António Guterres unveiled the bust of Mahatma Gandhi at the United Nations Headquarters. The bust will be the first Gandhi sculpture to be permanently located at the North Lawn Gardens of UN.

Mahatma Gandhi’s favourite bhajan, Vaishnav jan to was recited at the event. The event was also attended by the high-level representatives of the United Nations Security Council members including the incoming members and senior UN officials, added the release.

The sculptor of the bust is Ram Vanji Sutar, who made the Statue of Unity, the world’s tallest statue, located near Kevadia in the state of Gujarat, India, depicting Indian statesman and independence activist Sardar Vallabhbhai Patel.

S Jaishankar was in New York to Chair the United Nations Security Council meetings on 14-15 December 2022. India is holding the presidency of the United Nations Security Council for the month of December 2022. He presided over two High-Level Ministerial signature events: a debate themed New Orientation for Reformed Multilateralism, and a briefing on Global Approach to Counter Terrorism – Challenges and Way Forward.

The open debate on Reformed Multilateralism encouraged all member states to address the need for reforms in the global governance multilateral architecture, including the long-standing reforms of the UN Security Council, while the briefing on Counter Terrorism sought to promote consensus amongst Council Members on the principles of global counter-terror architecture.