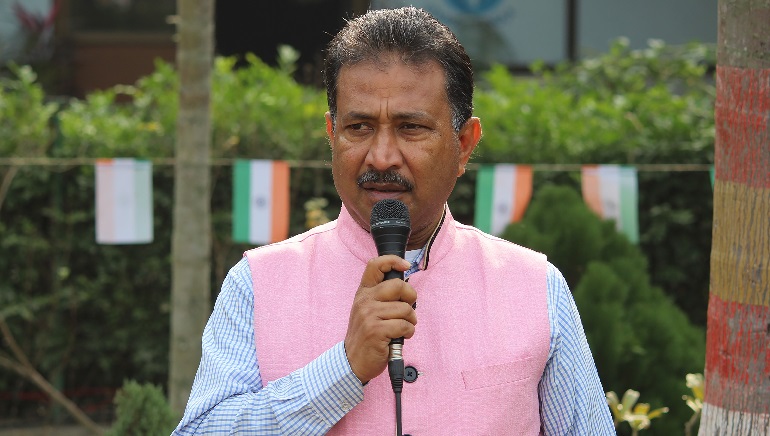 A social entrepreneur, motivational speaker, and a committed philanthropist, Mr. Malay dons many hats and each with equal determination. His leadership persona and vision is such that he envisions equality and growth for all. Rural economic development and quality education have been his biggest missions all through the years.

Amongst his various initiatives, his most notable one is the Swadhin Charitable Trust, which he started in the year 2009. Swadhin refers to Society for Welfare & Development of Human Initiatives, and has been Mr. Malay’s painstaking initiative to drive his mission of offering education to the youth. The objective of this trust is to develop medical colleges, organise training and development programmes, and drive social development through education.

Since 2009, Mr. Malay has been involved in the development of rural areas of West Bengal through the Swadhin Charitable Trust. The prime objective of his social activities has been to protect the minority people and tribal communities of West Bengal. He has partnered with more than 67 institutes to impart various interpersonal skills, technical skills, education and more to rural children, right from primary education to higher studies. The government and private ITI institutes that are involved in this partnership belong to the first 20 ITI institutes pan India. Polytechnics, skill development centres, B.Ed colleges, and other institutes are a part of these social development initiatives by Mr. Malay.

SERVICE WITH SINCERITY AND PASSION

Another feather in Mr. Malay’s cap is the Santiniketan Medical College (SMC). Established in 2020, the SMC is India’s first medical college built through a public-private partnership under the National Medical Commission Act. It was started by Mr. Malay to offer transformative learning experiences. The college is the first one to come up after the Centre’s decision to open a path for private players to partner with government hospitals and build medical colleges. Set up under the supervision of NITI Aayog, the teaching hospital is affiliated to Bolpur Sub-divisional Hospital.

Under Mr. Malay’s guidance, the medical hospital-cum-institute has been a frontrunner in providing world-class medical services with compassionate care and at affordable cost. It is also dedicated to producing globally competent medical professionals with a strong urge to serve humanity with the core values of sincerity and passion towards quality patient care guided by ethics.

Mr. Malay has made sure that the medical college has an array of modern laboratories, state-of-the-art equipment, and highly trained staff. To make medical education an enriching experience, he has introduced a few museums at the college. These museums have on display over 300 dissected specimens, 500 models, and other items from the world of surgery. His idea is to present to people key, lesser known medical facts about human bodies.

MANY INITIATIVES, ONE MISSION

A not-for-profit organisation started by Mr. Malay is Gobindapur Sephali Samaj Seba Samity. Through this institute, he offers efficient technical and non-technical training to people, which enables them to run educational institutions successfully. This institute also conducts training programmes under various livelihood sectors to help in socio-economic uplift of many people in need.

Mr. Malay also started Swatirtha Charitable Trust during the pandemic to offer services to rural people. The unprecedented pandemic and its aftermath were particularly harsh on the rural people whose livelihoods got affected. Under his guidance, Swatirtha Trust engaged in expanding plantation and agricultural activities to sustain the livelihood of rural people. The trust increased its services to feed rural people inside the campus during the pandemic. It also provides classes of physical activity and motivational lectures so that people from the rural community get interested in engaging with their jobs. This trust also provides e-learning study materials for students from different resources.

By participating in many skill development projects, Mr. Malay has managed to improve the lives of over 3,500 people. His vision and determination to see a visible change in society has often been recognised.

In 2020, Mr. Malay was recognised at the Leadership Innovation Excellence awards held by the Institute of Economic Studies (IES). He was also conferred the ‘Innovative and Excellence Award’ by the National Economic Summit in the same year.

Driven by benevolence for society and strong social conscience, Mr. Malay is an insightful and inspirational personality who has devoted his life to the uplift and sustainable development of the rural society of West Bengal. His philanthropic work for the marginalised communities of the state has led to an improved life and livelihoods for thousands of people. It is this kind of selfless work that makes a leader transform into a visionary.