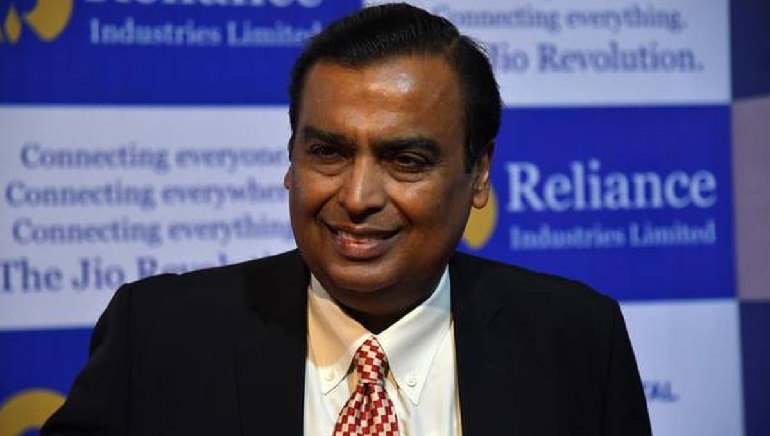 As the Chairman and Managing Director of $51billion (revenue) Reliance Industries Limited (RIL), Mr Mukesh Ambani is also its largest shareholder with a stake of 44.7%.

Under his astute leadership, RIL is on an expansion-spree, is efficiently capturing new markets, and has acquired the status of India’s second-most valuable company by market value and is fairing extremely well in refining, petrochemicals and in the oil and gas sectors.

Another bright feather in his heavily embellished cap is Reliance Retail Limited, which is the largest retailer in India.

FRONTRUNNER OF A DIGITAL REVOLUTION

Vehemently asserting that “Data is the new oil” at almost every platform, Mr Mukesh Ambani has explicitly expressed his intensions of digital expansion. He further states, “Anything and everything that can go digital is going digital. India cannot afford to be left behind.” No wonder, under his quintessential leadership, Reliance has swept the communication market through the ambitious Jio project whose revolutionary impact will play a substantial role in molding the future of India and will work towards bridging the urban-rural divide by providing end-to-end digital solutions for businesses, institutions and households.

Efficiently providing wireless 4G LTE service network (without 2G/3G-based services), Jio is the only ‘VoLTEonly’ (voice over LTE) operator in the country which lacks legacy network support of 2G and 3G, with coverage across all 22 telecom circles in India. Besides acquiring 16 million subscribers, within the first month of its launch – the fastest ramp-up by any mobile network operator anywhere in the world – Jio crossed 50 million subscriber mark in 83 days since its launch and has subsequently earned more than 130 million subscribers.

CARRYING FORWARD A LEGACY OF RELIANCE

The foundation of Reliance was laid in 1957 by Mr Dhirubhai Ambani as a provider of textile yarns to textile manufacturers. Foraying into textile manufacturing in the mid 1960’s, he set up his first factory in the year 1966. The lack of a proper distribution arm, which was necessary to avoid dependence on the existing players and to keep costs low, along with a shortage of funding led Reliance to come out with an IPO in 1977, raising US$ 1.8mn and in the process starting the capital markets culture in India.

After completing his Bachelor’s degree in Chemical Engineering from the University of Mumbai, Mr Mukesh Ambani was pursuing his MBA from Stanford University when he dropped out to assist his father in the construction of a polyester filament yarn plant after it got a license from the Indian government in 1981 to produce polyester filament yarn, beating the likes of other well-known Indian business houses such as the Tatas and Birlas. He efficiently facilitated its backward integration from polyester into textiles and then into petrochemicals in 1986 and later on carried out its upstream integration with oil and gas exploration and production, and more recently has enabled its smooth venturing into various unrelated sectors.

In the late nineties, Mr Mukesh Ambani spearheaded the creation of the world’s largest grassroots petroleum refinery at Jamnagar in Gujarat, with a capacity of 660,000 barrels per day (33 million tonnes a year), and integrated it with petrochemicals, power generation, port and related infrastructure. This crude oil refinery is one of the largest in the world, with 2% of global processing capacity and constitutes 15% of India’s exports, 4% of its stock market capitalization and 3% of its tax revenues and is the country’s largest private corporate investor. Further, he steered the setting up of another 580,000-barrels-per-day refinery next to the first one in Jamnagar. With an aggregate refining capacity of 1.24 million barrels of oil per day at a single location, Jamnagar has acquired the coveted title of ‘the refining hub of the world.’

He has created global records in customer acquisition for Jio, Reliance’s digital services initiative. He led and established one of the world’s most expansive 4G broadband wireless network offering end-to-end solutions that address the entire value chain across various digital services in key domains of national interest, such as education, healthcare, security, financial services, government-citizen interfaces, and entertainment.

Mr Mukesh Ambani is an elected Foreign Member of the prestigious United States National Academy of Engineering. Only nine other Indians have received this honour. He is the only Indian to be featured on Global Game Changers List of a leading international magazine. He has been awarded as Economic Times Business Leader of the Year, 2017 and has won Othmer Gold Medal by Chemical Heritage Foundation, USA in 2016. He was offered an honorary Doctor of Philosophy degree by the Indian Institute of Technology (IIT), Roorkee in and Honorary Doctor of Science by Institute of Chemical Technology, Mumbai in 2013. He was conferred the title of ‘Entrepreneur of the Decade’ by All-India Management Association in 2013.

Always supporting him in every thick and thin of life, as his pillar of strength, his better half Ms Nita Ambani, has significantly contributed to and made measurable progress toward his vision of an inclusive India. As the Founder and Chairperson of Reliance Foundation, she contributes to a positive societal impact through diverse community engagement initiatives. Established in 2010 to provide impetus to various philanthropic initiatives of RIL, the efforts of the group have already touched the lives of more than 15 million people across India in more than 13,500 villages and 80 urban locations.