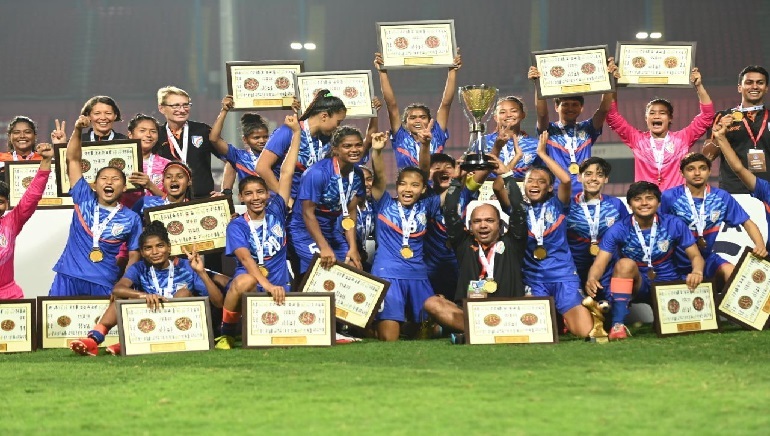 On Friday, the Indian football team clinched the SAFF U-18 Women’s Championship title at Jamshedpur in Jharkhand. The win was owed to a superior goal difference.

Indian lost to Bangladesh with 0-1 but managed to emerge as the champion of SAFF U-18 with a goal difference of +11 in comparison to +3 of Bangladesh. By scoring five goals in the tournament, Lynda Kom emerged as a valuable player for the Indian team with the highest goal scorer of the tournament.

In the last league game, Bangladesh edged India by a solitary goal. While in the fifth minute, Shubhangi found space in the opposition box and took a shot that went directly to Bangladesh goalkeeper Rupna. After Nitu placed the ball past Rupna in the 40th minute, the ball bounced off the post and straight into the arms of Bangladesh’s goalkeeper.

At the interval, Thomas Dennerby substituted Poonam for Shubhangi post which India captain Shilky Devi attempted a long-range shot, but an Rupna blocked it.

Following that, Martina and Sunita were replaced by Naketa and Amisha, respectively. Priyanka scored a goal from outside the box in the 74th minute as Bangladesh launched a last-ditch attack.