Sindhu And Manpreet Led India To The Opening Ceremony At The Commonwealth Games In Birmingham, 2022 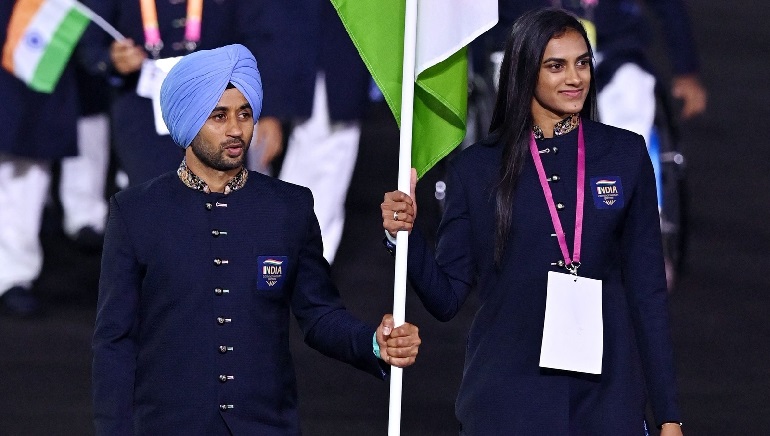 Sindhu And Manpreet Led India To The Opening Ceremony At The Commonwealth Games In Birmingham, 2022

Manpreet Singh and PV Sindhu were part of the Indian delegation at theCommonwealth Games 2022 opening ceremony in Birmingham. Among the Asian nations, India was the third nation to walk out after Bangladesh and Brunei. The quadrennial event will conclude on August 8 with 215 athletes from 16 diversified disciplines representing India.

Sindhu was the flag bearer for India for the second time. earlier she did it at the Commonwealth Games on Gold Coast four years ago. She said “It’s a great honor to be bestowed with the responsibility to lead the contingent and hold the flag at such an august gathering. I am extremely happy and I wish all my fellow contingent all the best for the Games. I would like to thank IOA also for choosing me as the Flag Bearer”.

Women’s singles champion Sindhu will be the favorite to win the gold medal in Birmingham. Last year, she won silver against Saina Nehwal in an all-India final, and she won bronze in Glasgow.

Meanwhile, Manpreet-led India dominated the Tokyo Olympics last year, finishing on the podium after a 41-year hiatus. In the bronze medal match, they defeated Germany 5-4 after overcoming a 1-3 deficit. Now that the team has performed so well, they will strive to win gold. The Indian team has been consistent and won silver medals in the 2010 and 2014 editions.