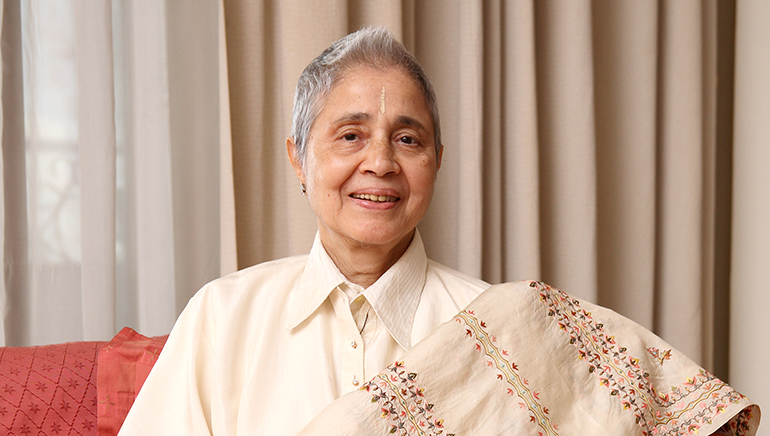 As the Chairperson of The Times Group, Smt. Indu Jain has enabled the conglomerate to enter new realms of advancement with her phenomenal efforts, matchless determination and indomitable leadership. She has strengthened the group’s leading position in television, radio and online media. Further, owing to her dedicated efforts over the years, The Times of India has not only established itself as the most popular newspaper of the nation, but it has boldly stamped its position as the world’s largest-selling English broadsheet daily.

Being a firm believer in empowering others with knowledge, Smt. Indu Jain has also established a world-class university located in Noida, UP. Bennett University offers international-level multidisciplinary courses and prepares students for what Chairperson Indu Jain believes will be the most important issues of the coming years, ranging from economics to ecology, social transitions to technology.

Under her leadership, the group has also ventured into the business of film production and distribution. In fact, thanks to her farseeing stewardship, the group is now a dominant player in the cinema industry.

The Times Group’s company, Junglee Pictures, has produced cutting-edge films that have been both critically acclaimed and commercially successful. These include the gritty ‘Talvar’, which won two National Awards, and the now-iconic ‘Raazi’, a pathbreaking film depicting a real-life espionage agent and her personal challenges.

All of these endeavours underline Smt. Indu Jain’s consistent commitment to creating a positive impact around the perception of women’s status in society. She has powerfully championed the cause of women’s empowerment across the globe. In India, her passionate advocacy led to the formation of the Federation of Indian Chambers of Commerce & Industry – Ladies Organization (FLO). She is the Founder Member of FLO and an icon of women leading businesses in what was once an unquestioned male sphere.

Alongside, Smt. Indu Jain has always appreciated and promoted literature and culture. She is the President Emeritus of Bharatiya Jnanpith, which is considered the highest literary honour in India. Her judgement and refined perceptions have steered the organisation towards recognising and celebrating some of the country’s most compelling and vibrant literary talent.

A deep philosophical thinker, Smt. Indu Jain practices spirituality in all spheres of her life. While approaching various issues, whether in the world of business, education, art or culture, she constantly draws from her deep well of spiritual understanding and guidance. Her humane and philosophically rich approach has enriched the mindscape of not just the Times Group, but also the entire Indian media. She views every incident of life, even its challenges and occasional setbacks, as the Grace of God. “The divine leads” is her guiding principle and belief. While recognising and tackling all the challenges which material life presents, Smt. Indu Jain has always been a true visionary, with her efforts to bring spirituality to the workplace, across India and the corporate world.

She has authored two books which share vast and valuable knowledge about saints, sages and spiritualism in India. The books have been best-sellers and have gone into multiple print runs. Her ‘Encyclopaedia of Indian Saints and Sages’ is a unique publication which gives a glimpse of different strands and lineages within Buddhist, Jain, Hindu and Sikh belief, exploring the profound legacies and simple teachings of their great spiritual heads and secular masters.

To encourage spirituality within an Indian corporate culture, she has promoted ‘Sach Bharat’, an initiative between the Times Foundation, ASSOCHAM, the Aditya Birla Group and the SREI Foundation. She has also created two large ashram facilities at the Art of Living Ashram, Bangalore and the Isha Foundation, Coimbatore. Besides imbibing the spiritual benefits of staying at such inspiring places, corporate employees can also hold important conferences there.

Apart from harnessing the growth potential of the multiple businesses where the Times Group is already active, Smt. Indu Jain’s vision is to lead the organisation into newer and ever more exciting business fields. An innate leader, she believes that the group should always lead the change and move ceaselessly towards bigger opportunities, instead of resting on its laurels. This spirit of striving for growth and imagining new horizons was summed up by her in 2013, when the group celebrated its 175th anniversary. Smt. Indu Jain, a visionary par excellence, declared, “We are not 175 years old but 175 years young – and the journey has just begun.”

AN EPITOME OF COMPASSION

Smt. Indu Jain has always striven to give back to society and empower some of its most vulnerable groups. In 2000, she founded and now heads The Times Foundation, which has garnered international acclaim for its activities in the field of development. The Times Foundation forges multi-stakeholder partnerships and acts as a point of convergence for government agencies, NGOs, the corporate sector, multilateral agencies and individuals working towards inclusive and equitable socio-economic development.

It is a platform for engaging meaningfully on critical national imperatives to enhance public awareness and facilitate impactful dialogues on crucial issues – these include water, environment, education, health, women’s empowerment, disaster relief and rehabilitation, advocacy, vocational training and spiritual wellness. The Foundation’s motto is “Your Mission is Our Mission”, which recognises the spirit of cooperation and mutual inspiration a bountiful society must have.

She also supports a ‘Widow Ashram’ at Vrindavan, which teaches vulnerable women’s groups life skills and ensures dignity for them. Apart from her many social initiatives, Smt. Indu Jain has always stepped up to the forefront whenever our nation has been hit by calamities. A proud and committed Indian, through the Foundation, she has provided monetary and other assistance to help and empower the needy to reconstruct their lives.

By combining tremendous business growth with deep ethical and spiritual pursuits, Smt. Indu Jain has shown a path of inspiration and motivation to many corporate and business leaders.