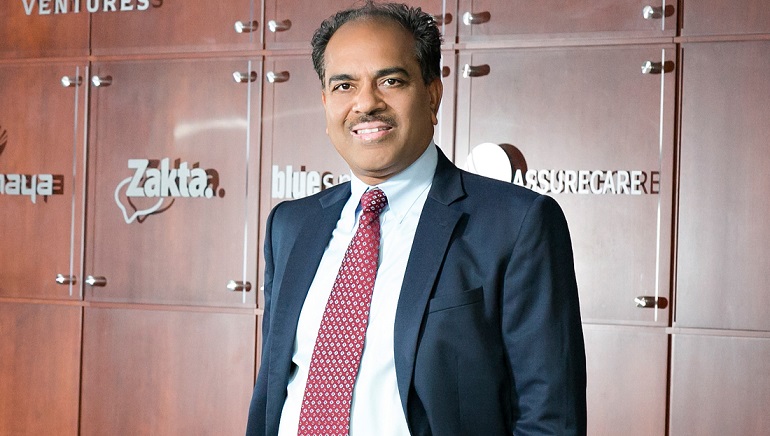 Mr. Vora comes from a humble Jain family with a solid business background. His strong desire for success from a young age, combined with his excellent upbringing and education, has shaped him into a successful individual. The astute and enthusiastic leader holds a Master’s degree in Computer Science from the University of Michigan, and a Bachelor of Science degree in Electronics and Communications from Gujarat University (India). The success of the programmer- turned-innovator is genuinely remarkable, and it can be credited to his years of hard work and professionalism. Under his inspiring leadership, Vora Ventures is taking giant strides and has been showing remarkable business growth consistently on a year-by-year basis.

HIS JOURNEY TO SUCCESS

Mr. Vora has been based in Cincinnati since early 1988 after graduating from the University of Michigan. The high-tech industry veteran considers his relocation to the Blue Chip City as propitious because it allowed him to join a friend and fellow student who was launching a business in the same city. Mr. Vora has spent the last 29 years in the Tri-State area, co-founding and selling multiple profitable technology ventures to Fortune 500 companies. In 2005, he sold his fourth tech start-up, Intelliseek, for more than $100 million in Ohio.

In 2006, Mr. Vora founded Vora Ventures as a technology holding company with multiple IT businesses. Vora Ventures creations include Ascendum, Ascendum KPS (India), AssureCare, Aquiire (sold in October 2018), CenterGrid, KoncertIT, Zakta, Bluespring, ShakeDeal (India), and Vora Technology Park. In 2014, Vora Ventures became the largest self-funded tech group – a remarkable achievement. In 2017, the ambitious leader purchased Sourcebits, a cutting-edge digital solutions firm headquartered in Silicon Valley. In 2018, Mr. Vora purchased ShakeDeal, India’s leading B2B Online Marketplace. In addition, he bought Hinge Global in 2019. It is a digital commerce startup based in Cincinnati that works with Fortune 5000 brands to enhance their eCommerce revenue. Additionally, he has been part of over 25 tech start-ups in Tier-II cities. Vora’s AssureCare leads the pack of digital healthcare transformation worldwide, with a mission to help improve health for millions worldwide.

According to Mr. Vora, obstacles and hurdles are an inevitable part of entrepreneurship, particularly in the IT industry, where one must learn to quickly embrace constant change. The optimistic leader believes that each challenge reveals a key opportunity to grow. He says, “If you see an obstacle as a challenge, it is indeed a challenge. But if you are motivated by the obstacle, then it turns into an opportunity. I believe that impediments should always be viewed as opportunities.” It is his vigorous optimism that drives him to stay focused on the future while dealing with today’s obstacles. Mr. Vora is renowned for his innovation, speed of execution, sound business principles, and wellbeing (care) for his employees. Throughout his career, he has spearheaded advanced and powerful information technologies in the domain of distributed (client/server) and Internet-based computing, as well as advanced search engines and text-mining. The visionary leader has also pioneered the design of numerous leading-edge software projects, including Pioneer Systems (bought by Unisys), ICC (bought by Attachmate), SecureIT (bought by VeriSign), and Intelliseek (merged with Nielsen-Buzzmetrics).

Mr. Vora is a bold leader who coined the term “Uncommon Sense”. Uncommon Sense is all about empowering common people to do uncommon, seemingly impossible things with a fraction of resources, in a record time. Otherwise called defying odds. It is a step above the common sense that allows leaders to venture outside their comfort zone. It includes taking measured risks, making rapid decisions based on relevant data to seize opportunities, and understanding human motivations to create win-win partnerships, Mr. Vora summarizes The Uncommon Sense in five core business values in his upcoming book – Aggression with Ethics, Frugality with Class, Humility with Confidence, Quality with Speed and Creativity with Process. He adds ”the key is to practice these seemingly opposite values at the same time, all the time”.

SENSE OF URGENCY WITH FAIRNESS

As a focused leader, he strongly believes that a clear sense of purpose and mission among all stakeholders and empowerment of employees to own decisions through entrepreneurial culture is key to success in a tough, competitive and rapidly changing businesses. Mr. Vora also believes in creating a sense of spirited urgency with his team for success. Embracing and instilling “Urgency without Desperation” (he says) enables his teams to never procrastinate and make decisions quickly. “The world is moving at a faster pace as a result of technological advancements; and ultimately all businesses are about people. So moving fast while not being reckless, rising from failures with empathy and humility is critical.” He exhibits and conveys the importance of fairness and urgency via his actions, conduct, and words.

Mr. Vora is well-known for his active involvement, and dedication to the local and global communities. He believes in leaving a lasting impression by reinvesting in people and communities. The compassionate leader gives 2% of his profits to Vora Foundation, which has partnered with Green Light Foundation to help children, teens, and families in high-poverty urban areas better their lives. He also supports the Ekal Vidyalaya campaign – a movement that aims at providing education to every child by establishing one-teacher schools in the most remote rural and tribal villages in India. Mr. Vora is active in Jain community and is a staunch supporter of organizations like United Way and Association for Indian Development(AID). What’s more, he encourages his employees to participate in charitable activities through The Vora Charitable Action Committee.

To deal with the challenges of the current COVID-19 pandemic situation, he ensured that there have been no layoffs or pay cuts during the pandemic, not even for hourly employees. What’s more, Ascendum Solutions has also launched SafeReturn, a health screening app for students and workers in the US, for improving safety and driving actionable intelligence to reduce COVID-19 incidences.

Mr. Vora’s experience and zeal for excellence have won him several international accreditations. The exuberant leader, also known as the Midwest’s high-tech poster boy, is the youngest winner of the Lifetime Achievement Award for Innovation at Midwest Awards in 2014. Mr. Vora is also a recipient of the 2019 “Entrepreneur of the Year” at the ACG Deal Maker Awards and numerous other entrepreneurial awards from reputable global organizations including Ernst and Young.