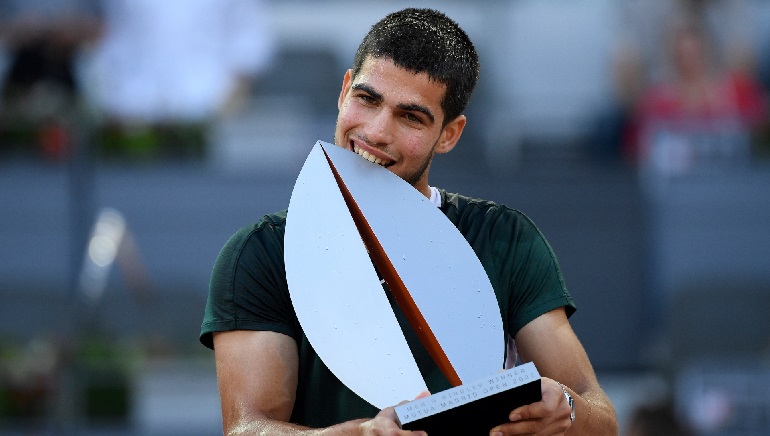 On Sunday, Spaniard Carlos Alcaraz raced to the Madrid Open title brushing aside German Alexan Zverev with 6-3, 6-1 in 62 minutes. After winning in Barcelona last month, the 19-year-old’s winning streak now stands at 10 matches and secured his second consecutive title.

Alcaraz is on his way to being on No.6 by Monday as he beats Rafael Nadal and world No. 1 Novak Djokovic. He is first in a clay-court tournament. Alcaraz turned 19 on Thursday in Miami and won his first ATP Masters 1000 level title. Nadal was the only player younger than him to achieve that milestone when he won in Monte Carlo and Rome as a teenager.

Alcaraz said, “This tournament is special for me because it’s a tournament I came and watched when I was seven or eight”. The first set was won by Alcaraz after he broke in the sixth game and held his serve effortlessly.

To which Zveren said, “Right now you are the best player in the world. Even though you are still five years older than you, you are still beating us all. This is tennis, you cannot be perfect every day. Even though I lost quite badly today this is still my favourite court in the world”. Zverev was a champion in the Spanish capital in 2018 and 2021.