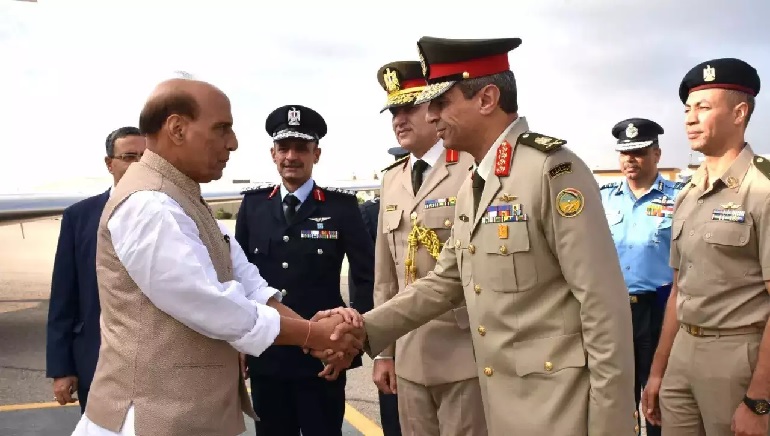 On Wednesday, Defence Minister Rajnath Singh called his visit to Egypt “highly productive” and expressed feelings positive about the MoU on defence cooperation signed between the two sides which will lead to “historic heights” for the Indo-Egyptian partnership.

He was visiting the strategically vital Arab nation for three days. Additionally, he shared photos of himself bidding goodbye to the host country’s officials.

He tweeted, Just concluded a highly productive visit to Egypt. I thank President H.E. Abdel Fattah Al-Sisi and my counterpart General (Mohamed) Zaki for warm hospitality and wide-ranging discussions. I am confident that the MoU on Defence Cooperation will take our partnership to historic heights.”

On Monday, Singh held extensive discussions with his Egyptian counterpart, General Mohamed Zaki. Furthermore, the MoU of Indian and Egyptian officials reached a consensus on improving joint exercises during the visit.

Mr Singh further added that he had an excellent meeting with Defense Minister Of Eygpt’s General Mohamed Zaki in Cairo and had a wide-ranging discussion on several initiatives to further expand bilateral Defence engagements.

In addition to Singh’s visit on Monday, Egyptian President Abdel Fattah El-Sisi and he discussed bilateral military-to-military cooperation, with the latter stressing that both countries must share expertise and best practices in countering the threat of terrorism.