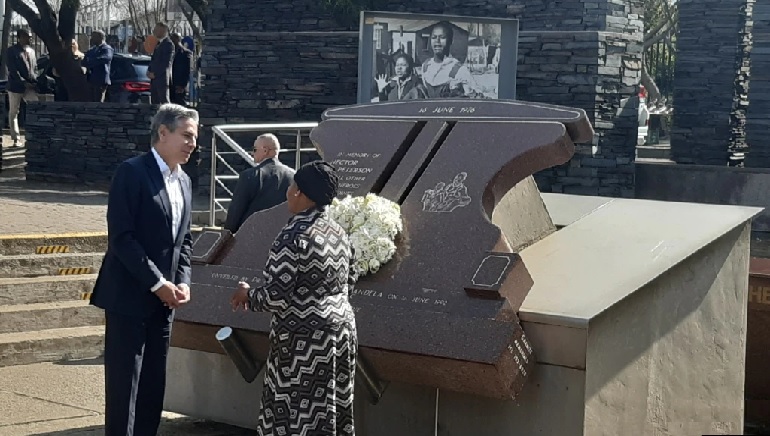 U.S. Secretary of State Antony Blinken arrived in South Africa as part of his three-nation tour of Africa. He visited a museum in South Africa, remembering how the country’s Black youths helped to end white racist rule.

Blinken’s visit to Africa is seen as part of a contest between Russia and top western countries for support from African countries over the war in Ukraine. His trip to Africa comes after recent visits by Russian Foreign Minister Sergey Lavrov and French President Emmanuel Macron.

South Africa is one among the other African countries that have maintained a neutral attitude toward the war and have not openly criticized Russia.

After arriving early morning, Blinken went to the outskirts of Johannesburg to visit the Hector Pieterson memorial in Soweto township, which is built in memory of a student killed in 1976 when protesting South Africa’s regime of apartheid.

“Hector’s story is one that resonates because we have our own struggle for freedom and equality in the United States and South Africa’s story is unique, but there are also so many common elements, and that resonates powerfully,” said Blinken.

On Monday, Blinken will hold a press conference with his South African counterpart Naledi Pandor in which the two countries’ different stances on the Ukraine war are expected to be discussed.