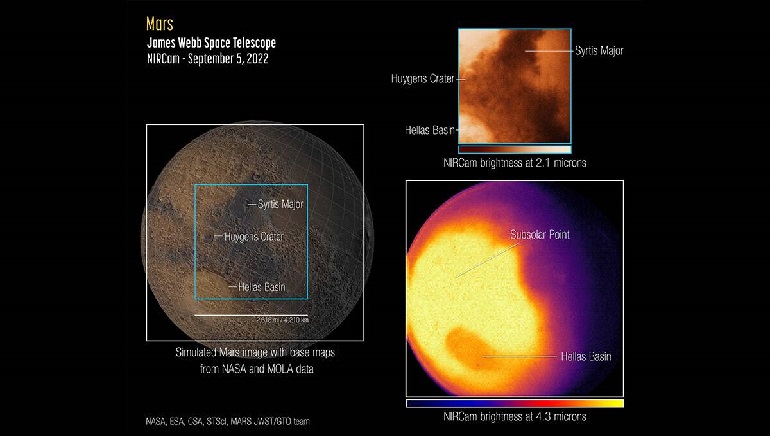 The European Space Agency (ESA) released the first images and infrared spectrum of Mars from the James Webb Space Telescope (JWST). On September 5, 2022, Webb captured its first images and spectra of the red planet.

Located at the second Sun-Earth Lagrange point (L2), Webb is approximately 1.5 million kilometres away from our planet. As the telescope gazes at Mars from its vantage point, it can observe the sunlit side of Mars’ observable disk. By doing so, the JWST is able to capture images and spectra at the resolution required for studying short-term phenomena.

There are a number of phenomena associated with these changes, including dust storms, weather patterns, and seasonal changes. Considering that this telescope is designed to detect faint distant objects, it might not seem impressive at first.

There are many bright objects in the night sky, including Mars, which is very close to the Earth and very bright both in visible and infrared light. In contrast, Webb’s sensitive instruments are almost blinded by the bright infrared light from Mars, leading to “detector saturation.”

To overcome this problem, scientists use very short exposures and measure only a small fraction of the light that hits the detectors. After analyzing the data, they came up with the image using special techniques.