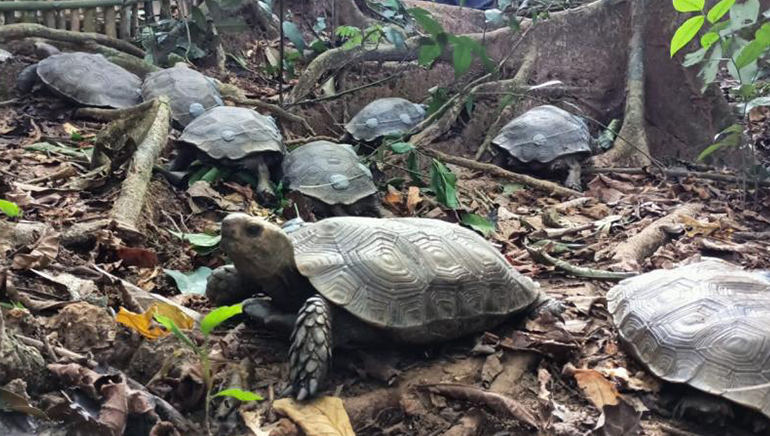 Ten captive-bred Asian Giant Tortoise (Manouria emys) juveniles on Monday were released into a protected area of Nagaland to be rewilded. Asian Giant Tortoise is a “critically endangered” species under the International Union for Conservation of Nature Red List of Threatened Species.

The Nagaland Forest Department and two non-profit organisations, Turtle Survival Alliance and Wildlife Conservation Society India conducted a soft release of the juvenile tortoises for population recovery. The released animals were conserved and bred for five years at the Nagaland Zoological Park, Dimapur. With 110 hatchlings and juveniles from 13 adults, the Park has the highest number of Asian Giant Tortoise. The juveniles were born in 2018 and have an average weight of 2.4 kg.

“In the first phase, animals will be soft-released or moved to a large natural enclosure with native habitat for acclimation throughout the winters and allowed to disperse into the forests at the onset of monsoon followed by active tracking by a joint project team,” said T Aochuba, Director, Intanki National Park.

Rewilding helps a species to develop site fidelity and develop the habit to live in the vicinity of the release closure. It helps researchers in collecting scientific information and developing a better rewilding strategy.