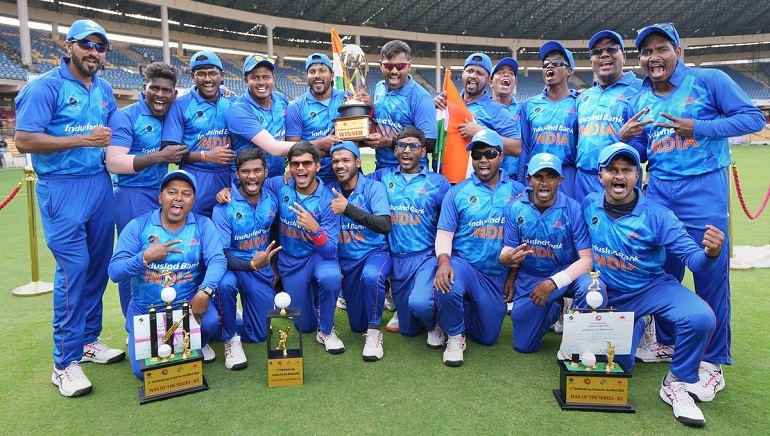 The Indian national blind cricket team made history on Saturday as they won the T20 World Cup for the Blind for the third consecutive time. The Indian team beat Bangladesh by an impressive margin of 120 runs at M Chinnaswamy Stadium in Bengaluru.

India captain Ajay Kumar Reddy won the toss and elected to bat. The team set a target of 278 runs for Bangladesh. Bangladesh, in response, could only manage to reach 157 in 20 overs. India’s Sunil Ramesh scored 136 runs off just 63 balls. He was named both Man of the Match and Man of the Series in the B3 category. Reddy reached the three-digit mark in just 50 deliveries.

The Indian national blind cricket team is affiliated with the Cricket Association for the Blind, a body independent of the BCCI. The rules of blind cricket are formed by the World Blind Cricket Council. In blind cricket, a team has 11 players, comprising four B1 players (fully blind), three B2 players (partially blind), and four B3 players (partially sighted). The game is played using a plastic ball that is larger than a standard cricket ball and fitted with ball bearings that make a noise when it is moved. The wickets are made of fluorescent metal tubes and all three wickets are attached together. Another important rule is that the bowler shouts “Play” before throwing the ball.