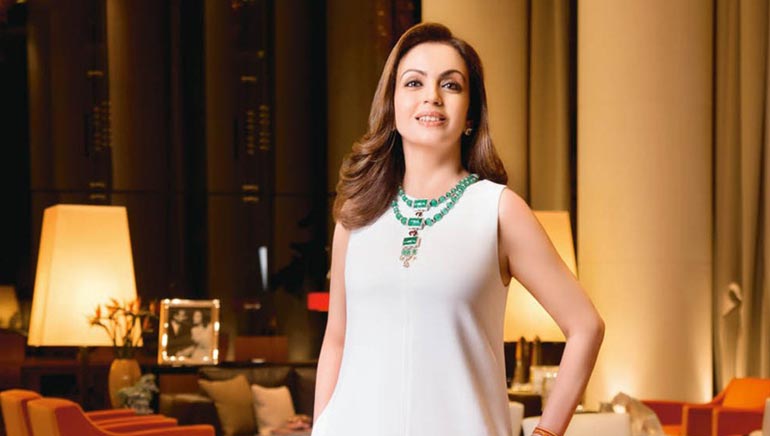 From India’s richest woman to the leading lady in style, Nita Ambani breaks to turtle conservationists’ perception of Indians towards woman power play. She has proved that more than any sophisticated ornament; it is the beautiful soul that keeps the charming personality gleaming not known to many, from couple of months, Reliance Foundation, named after her husband Mukesh Ambani’s Reliance Industries, chaired by the ever-smiling Nita Ambani has been generously donating in major U.S. museums seeking to mount shows with ties to her homeland.

Soaring high with performance and fulfilling promises to make India a better place for everyone, Mrs. Ambani runs the largest CSR initiatives of the country called the Reliance Foundation. As she says, at Reliance Foundation, the vision is to build an inclusive India by pioneering a holistic model to address the nation’s multifaceted development challenges, and contribute to its collective aspirations.

The focal point is the commitment to enhance the quality of life of people from marginalised and vulnerable communities, by empowering them and catalysing change through innovative and sustainable solutions. Their steadfast endeavour is to create replicable and scalable models of development through an integrated approach in the true Reliance spirit of maximising societal value for all, and making it a movement.

SOWING THE SEEDS OF KINDNESS

Mrs. Ambani is a familiar name when we count on people who are steering steering initiatives in the area of education, sports, health and art and culture. She has been involved in promoting multiple sports in the country with focus on developing talent through a number of large-scale grassroots initiatives. The grassroots programmes that she has initiated have reached out to over 3 million children in multiple sports.

Under her guidance, the Reliance Foundation has launched the “Health for All” initiative through a community outreach programme for the underprivileged within five kilometres of its hospitals. Her eye for details has transformed the working style of many at the organization. It is this attention to detail that also reflects in the relationships Mrs. Ambani builds, both at work and with friends. “She has a way to make you part of the Reliance family. She will ask about children. She would know if a child has an illness. I don’t know how she does it. But she has a way of figuring out. There are too many instances where she overwhelms you,” says a former employee.

Led by Mrs. Ambani, Reliance Foundation was set up in 2010 to provide impetus to various philanthropic initiatives of RIL. The efforts of the group have already touched the lives of more than seven million people across India, in more than 10,500 villages and urban locations. The Foundation has a comprehensive development approach. Its prime objective is to create and support meaningful activities through innovative institutions to address some of India’s most pressing developmental challenges. The Foundation lays significant emphasis on leveraging technology for developmental solutions. Following its model of direct engagement, the Foundation directly reaches out to the affected communities through trained professionals.

THE PLUNGE IN DIVERSITY

Over the years, Reliance Foundation’s initiatives have continued to evolve, while remaining responsive to the ever-changing needs of society. The Foundation is currently focusing on creating change in areas of Rural Transformation, Health, and Education, Sports for Development, Disaster Response, Arts, Culture & Heritage and Urban Renewal.
To maximize its reach and improve outcomes, Reliance Foundation has also established strategic partnerships with organizations that have the technical expertise and experience to undertake various programmes in the identified focus areas of operation.

Hailing from a Gujarati Family, Mrs. Ambani both music and classical dance is close to her heart. Her mother was a well-known Gujarati Folk Dancer and started to teach dance to Nita when she was just eight year old. Nita also started to show immense interest in dancing. She became quite famous for her skills in Bharatnatyam. It was this fondness for classical dance that captivated the heart of Ambani’s. Nita Ambani also used to perform Bharatnatyam at various stages throughout Gujarat. In one of her many performances, the Ambanis, specifically Dhirubhai and Kokilaben Ambani, who were at a cultural show, saw Nita dancing. They were so impressed with scintillating performances of Nita. She was not only dancing perfectly, but they also noticed an amazing beauty coupled with Indian tradition in her. Rest as they is history.

Social commentator, columnist Suhel Seth has always maintained that she is a “born Ambani”. “She is India’s first lady. He further added that Mrs. ambani carved an identity that doesn’t take away from that legacy. After she addressed at FICCI, a number of young girls went up to her asking for autographs. One of them said, ‘Nita ma’am, you’re our role model and inspiration for all of us’,” recalls Seth. At one time Parmeshwar Godrej was the face of Indian society but now Nita has displaces her. Seth feels, “It’ll be unfair to compare her with anyone. Nita has a much superior edge laced with sobriety and soberness. She has contributed in so many spheres – be it the school or her cricket team.

In the very famous words of Mrs. Ambani, “Between my past, the present and the future, there is one common factor: Relationship and Trust. This is the foundation of our growth”, she has never disappointed any of the task driven under her guidance to be able to carve a niche out of it. Following a recent series of events, Mrs. Ambani Nita Ambani, founder-chairperson of Reliance Foundation, has been elected as an independent candidate to be a member of the International Olympic Committee (IOC). The election for membership, which officials say is a mere formality, is scheduled at the 129th IOC Session at Rio de Janeiro between August 2 and August 4. As per the selection process, Mrs. Ambani, will continue to serve as a member of the IOC until she reaches 70 years of age.

IOC President Thomas Bach, announcing the eight candidates at a press conference in Lausanne, said: “This is a very outstanding group of personalities that are experts in their respective fields.”

Nita Ambani was among the eight Indian leaders who featured in Asia’s 50 Power Businesswomen 2016 list, released by Forbes earlier this year. A trained Indian classical dancer, she also looks after the Dhirubhai Ambani International School, the HN Reliance Foundation Hospital and played a key role in designing the residential part of the RIL
Township at Jamnagar in Gujarat.

A DOSE OF PANACHE

When it comes to living a luxurious lifestyle, Mrs. Ambani is second to none. Her love of crimson and has been often seen attending important occasions in variations of crimson colored Sarees. Her Gujarati background reflects in the designs as well as draping style of the saree. One of her favorite Indian designer is Abu Jani – Sandeep Khosla who churns out stunning Indian attires for her in succession.

Known for her opulent yet traditional styling, Mrs. Ambani’s wardrobe comprises of big jhumkas, heavy pendants and chunky bangles to subtle and sleek designs.
The aura of appeal and power which Mrs. Ambani reflects is par excellence. Her popularity has grown tremendously over the past couple of years which has also felicitated her with the honour of being the cover face of many international magazines like Femina, People, Verve (along with husband Mukesh Ambani), L’Officiel’s etc. Amongst the entire very special cover shoot for Hello was done with her daughter, where she shared the space with the gen next.

Mother Nita Ambani never disappoints her children, despite managing multiple tasks at a given time; she never fails to be a doting mother to her three extremely talented children. From being the driving force behind Anant Ambani’s drastic transformation while dealing with medical conditions to standing rock solid behind while Akash established his firm steps in the telecommunications business with Reliance Jio, she has been the source of inspiration to her family since forever.