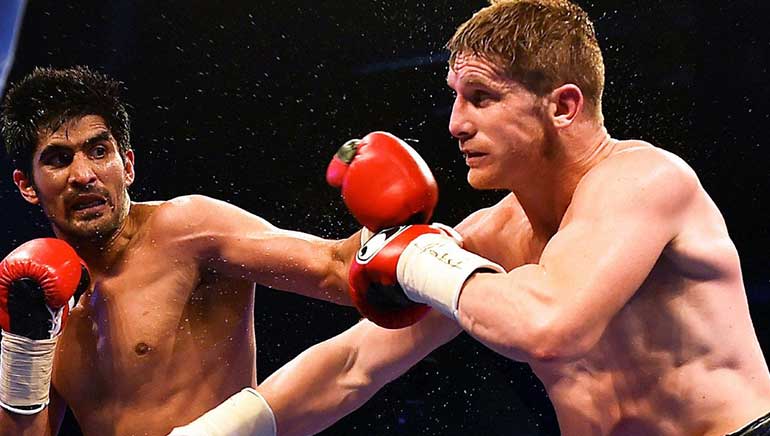 Vijender, who has won India’s first Olympic medal for boxing, took all 10 rounds to dismantle the Welsh-born Australian Hope. He scored 98-92, 98-92, 100-90 to be the unanimous winner. He is now ranked 15th in the WBO rankings.

“This comes after a lot of hard work put in by me, my trainer, my team,” an emotional Vijender said after the win I thank my coach, my promoter and my team who have done a fantastic job.” He further added, “It’s not about myself, it’s about my nation, my country.”

An ecstatic Lee Beard who coached Vijender Singh showed his appreciation for the world champion, “When I first saw him, it took just 15 minutes for me to gauge that he will win a world title. I looked into his eyes and I saw a fire. Whatever he seems to focus on, he gets it. Of all the fighters I have trained, he is one of the best when it comes to learning; he is an extremely quick learner.”

It was Vijender’s first bout in his homeland after he turned professional last year. Delhi’s Thyagraj stadium was jam-packed with his fans cheering for him. Many celebrities like Randeep Hooda, Mary Kom, Virender Sehawag, Yuvraj Singh, Suresh Raina, and Rahul Gandhi were also present in the stadium to witness the epic win. As soon as the results were announced, Twitter flooded with congratulatory messages for the champion. Prime Minister and the President also congratulated Vijender for his classic win.