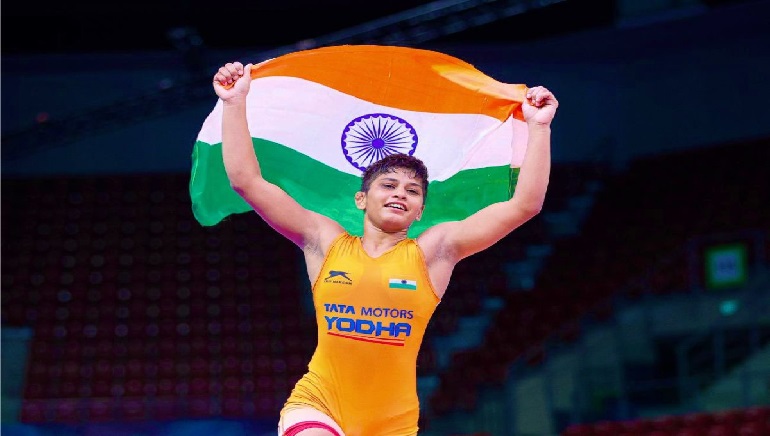 Antim Panghal scripted history as she became the first-ever Indian woman wrestler to claim gold at the U-20 world championships when she got the better of Kazakhstan’s Altyn Shagayeva 8-0 in the 53kg category final in the capital city of Bulgaria on Friday.

In the tournament’s 34-year-long history, this is the first time that an Indian female wrestler has finished on top of the podium. Antim, who comes from Haryana’s Bhagana village in the Hisar district, put Shagayeva under her control with her leg attacks and takedowns to win the title of the world junior champion.

The 17-year-old Antim, who is the youngest of four siblings, won all her matches by big margins, including her bout against European champion Olivia Andrich, whom she beat by technical superiority (11-0). “I didn’t know about the record. Only after winning the final did my coaches tell me that I have become the first-ever woman wrestler from India to win the championships. It’s a proud feeling for everyone. I am thankful to my parents for allowing me to pursue wrestling, especially my didi (sister Sarita, for always supporting and encouraging me. My target is to win an Olympic medal for the country,” said Antim after her victory.

In the quarters, Antim had defeated Ayaka Kimura of Japan and then Ukraine’s Nataliia Klivchutska (11-2) in the semis.