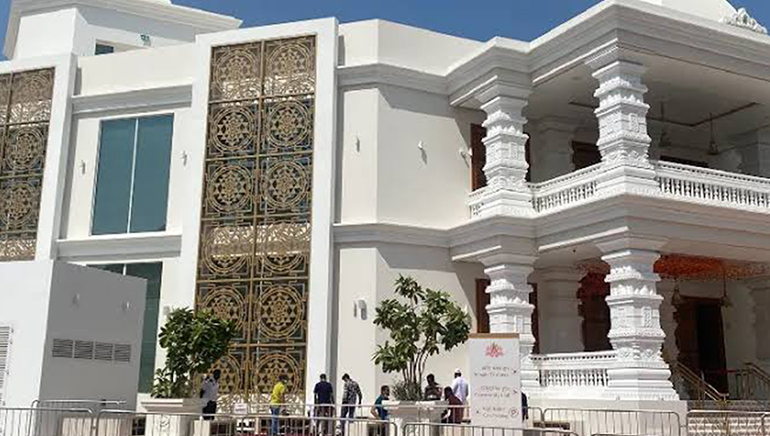 This Dussehra, Dubai will have a new Hindu temple. Jebel Ali in Dubai will be the site of the temple, which will be inaugurated the day before Dussehra. One of the oldest Hindu temples in the UAE, Sindhi Guru Darbar Temple, is being expanded into a new temple according to the Khaleej Times.

Dubai’s new temple will open its doors to the public on October 5. The foundation was laid for the temple in 2020, reports state. The people of this area had been seeking a place of worship for more than a decade. The temple had its soft opening on September 1 this year, with thousands of visitors allowed access to the premises, which featured 16 deities, ornate pillars, Arabic and Hindu geometric designs, and bells on the ceiling.

The deities are placed in the main hall, and the central dome is decorated with a pink lotus. As part of the online platform, temple management has also activated QR-code-based appointments. Dubai’s new Hindu temple will be open between 6.30 a.m. and 8 p.m., according to its official website.

There can be up to 1200 worshippers on a daily basis at the premises. It is currently prohibited to visit the temple more than once an hour.  Those who have booked an appointment through the temple’s official website will be allowed entry without any restrictions from October 5. It is located in Jebel Ali’s ‘Worship Village’. In addition to several churches, the location is home to a gurdwara. Guru Granth Sahib is also installed at the temple.