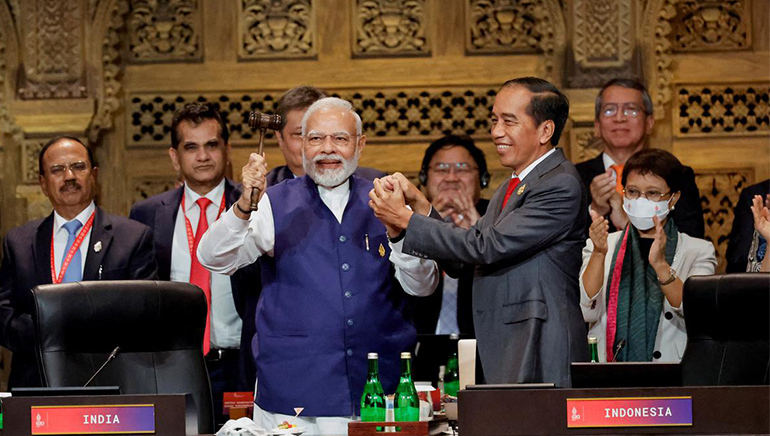 Indonesia handed over the G20 presidency to India for the coming year as the Bali summit of the grouping ended on Wednesday with the member states signing the joint declaration.

Indonesian President Joko Widodo handed over the G20 presidency to Prime Minister Narendra Modi at the handing over ceremony at the conclusion of the two-day summit. Taking over the presidency of the G20 Summit, Prime Minister Narendra Modi called it a matter of pride for every citizen in India, and said the G20 summit can be made a ‘catalyst for global welfare’. He said that India’s G20 presidency will be inclusive, ambitious, decisive, and action-oriented, and comes at a crucial time when the world is facing geopolitical tensions, economic slowdown, and rising food and energy prices.

The G20 comprises 19 countries, Argentina, Australia, Brazil, Canada, China, France, Germany, India, Indonesia, Italy, Japan, South Korea, Mexico, Russia, Saudi Arabia, South Africa, Turkey, the UK, the USA and the European Union (EU), which together account for over 80 per cent of the global GDP, 75 per cent of international trade and two-thirds of the world population.