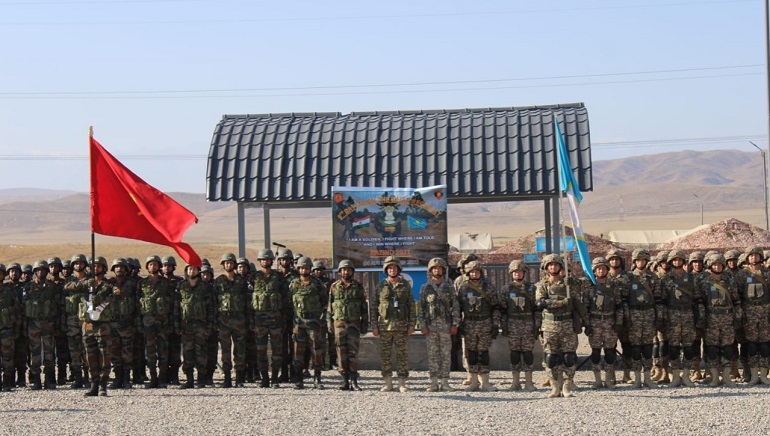 The 6th Edition of India-Kazakhstan joint military training exercise, KAZIND-22, is going on in Umroi (Meghalaya). The exercise, scheduled from 15-28 December 2022, was instituted in 2016 as Exercise Prabal Dostyk, which was later upgraded to a Company-level exercise and renamed as Ex Kazind in 2018.

Kazakhstan Army soldiers comprising troops from the Regional Command, South and Indian Army soldiers from the 11 Gorkha Rifles are participating in the exercise. The objectives of the exercise are to build positive military relations, imbibe each other’s best practices, and promote the ability to operate together while undertaking counter terrorist operations in semi-urban/jungle scenarios, under a UN peace enforcement mandate. This joint exercise enables the two armies to train, plan and execute a series of combined tactical drills for neutralising likely threats that may be encountered in UN peace-keeping operations.

The scope of this exercise involves a Command Post Exercise (CPX) at the Battalion level and Company level Field Training Exercise (FTX) on sub-conventional operations. During the exercise, participants engage in a variety of missions ranging from joint planning, joint tactical drills, basics of special arms skills, HADR and raiding a hostile target.

“Exercise KAZIND” will also enhance the level of defence cooperation between Indian Army and Kazakhstan Army, which will further foster the bilateral relations between the two nations.