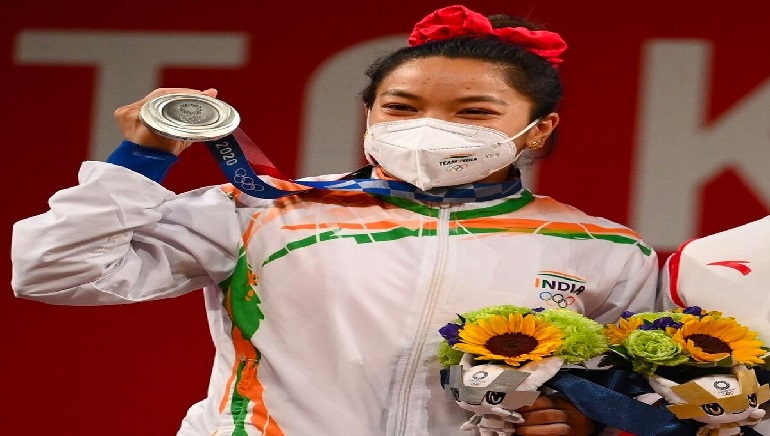 The Indian Weightlifter Mirabai Chanu creates history after ending India’s over two-decade-long wait as she wins a silver medal in the 49kg category at the Olympics. She opened India’s medal account at the 2020 Tokyo Olympics. China’s Zhihui created an Olympic record in the finals by lifting 94kg in the snatch event. Zhihui lifted a combined weight of 210kg.

Weightlifter Mirabai Chanu has been a world champion in the past and won the gold medal in the 48kg category in Anaheim in the commonwealth Games. This was Chanu’s second appearance at the Olympics. In the Rio Olympics in 2016. Chanu failed in her first snatch at 82kgs, managed the second snatch before failing at 84kgs. She even flunked at all the three attempts in the Clean and Jerk. However, she came out with tremendous amends this year. She completed her first and second snatch attempts at 84kg and 87kg. But she could not manage a win at her third snatch of 89kg.

Chanu had created the Clean and Jerk world record in April earlier this year in the 119kg category. She lifted weights of 110kg and 115kg. She was considered as the strongest contender for a medal in this Olympics.