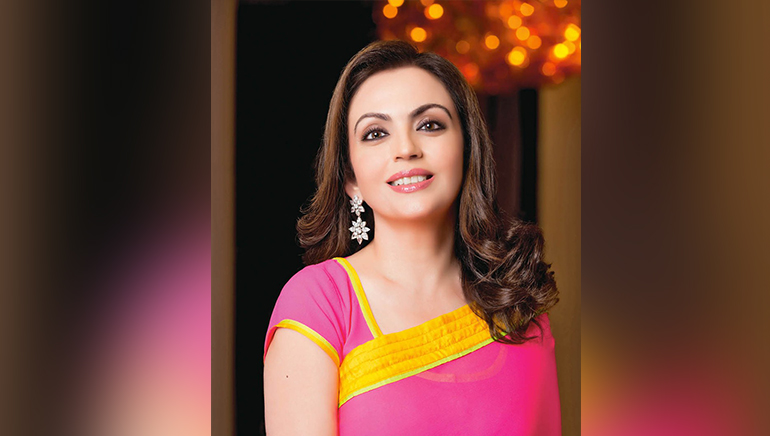 Her love for her family had kept her grounded and focused. But do you know that now Mrs Ambani, Nita Ambani had
quite a modest beginning and hailed from a middle-class family in surburban Mumbai.

Nita Ambani has an undergraduate degree in Commerce from Narsee Monjee (NM) College of Commerce and Economics and had taken up a job as a school teacher when she crossed paths with Ambani family. And she loved her job. Having trained in Bharatnatyam for several years, Nita often travelled around the country for performance. And during one such, late Mr Dhirubhai Ambani noticed her and wanted his older son Mukesh to marry her. She might have thought that this would be what she would do her whole life. But fate had other plans for her. Nite met Mukesh and love blossomed. Mukesh popped the question and Nita said yes. But there was one condition.

Well, during that course of time, Nita was also used to work as a school teacher and wanted to continue her profession even after marriage. This condition was agreed upon and soon the two got married. This led to the weird
situation of a millionaire working in an ordinary school.

Meanwhile, during an interview, Nita Ambani shared a personal experience that occurred in the school. During the
1987 World Cup, one of her students’ parent had offered her two tickets to the stadium. Nita, however, refused and
was later seen seated in the VIP stand during the match. Reliance Group was in-fact one of the sponsors of the
series. It was only then did the family realise who Nita was.

Nita, however, left her job after a few years and started taking an active part in Reliance Group. Interestingly, in a recent interview, Mukesh Ambani also expressed an interest in being a teacher in the future. “With my wife
being a teacher, she is now saying that it is high time that you teach. Both of us will be involved in the education in the coming years, that is something that we want to do more for our own satisfaction than anything else,” stated Mukesh.

Nita Dalal Mukesh Ambani (born 1 November 1963) is the chairperson and founder of the Reliance Foundation and a
non-executive director of Reliance Industries. With a family fortune estimated in excess of $40 billion, she is among the richest in India. She is married to Reliance Industries chairman and managing director Mukesh Ambani. She
is also an art collector and owner of the Mumbai Indians cricket team. Nita is the founder and chairperson of
Dhirubhai Ambani International School, Mumbai.

She was listed in 2016 in ‘the fifty high and mighty Indians’ list by India Today. and in ‘the most influential
women business leaders in Asia’ list by Forbes. She was also the first Indian woman to become a member of the
International Olympic Committee (IOC). Nita Ambani (née Dalal) was born on November 1, 1963 in a middle-class Gujarati family in Mumbai to Ravindrabhai Dalal and Purnima Dalal. She completed her bachelor’s degree in Commerce from Narsee Monjee College of Commerce and Economics. She studied Bharata Natyam, and performed frequently.

Ambani started out as the founder and chairperson of Reliance Foundation, the CSR arm of Reliance Industries. She is also the owner of Mumbai Indians. and in 2014 she was elected to the board of Reliance Industries. In 1997, Nita Ambani was involved in the project of building a company township for the employees of Reliance’s mega-refinery at Jamnagar. The project involved setting up a well-planned, tree-lined and an environment friendly colony that would house more than 17000 residents. Today, the Jamnagar complex has one of the largest orchards with nearly 100,000 mango trees that is also home to a variety of birds.

Reliance Foundation is an Indian philanthropic initiative founded in 2010 by Nita Ambani. Reliance Industries is a
patron of the organization. Ambani is also the co-owner of Indian Premier League (IPL) team, Mumbai Indians. She led the ‘Education for All’ (EFA) initiative as part of Mumbai Indians’ way of giving back to society. EFA has reached over 70,000 underprivileged children and created awareness for education using various media and digital platforms.

Mrs Ambani is the Founder & Chairperson of the Dhirubhai Ambani International School in Mumbai. DAIS has been ranked as one of India’s best schools by some publications.

On 3 June 2016, Ambani was among eight candidates nominated for membership in the International Olympic Committee (IOC) by the Swiss-based panel. The election of these new members was held during the 129th IOC Session in the first week of August 2016. Ambani was elected as a member of the IOC on 4 August 2016, its first Indian woman member.

Nita is the daughter of Ravindrabhai Dalal and Purnima Dalal. She has a sister, Mamta Dalal, who works as a school
teacher. Ambani grew up in a middle-class environment in suburban Mumbai. She is a trained Bharatnatyam dancer. She met Mukesh Ambani when she was a school teacher and got married to him in 1985. After marriage, she worked as a teacher for a few years.

For her initiatives on grassroot sports, Ambani received the ‘Rashtriya Khel Protsahan Award 2017’ from the President of India. She received the award on behalf of Reliance Foundation as its chairperson. She is the recipient of the award for Best Corporate Supporter of Indian Sports, given by the Times of India. Nita Ambani, wife of Reliance Industries chairman Mukesh Ambani, on Wednesday became the first woman to be appointed on the board of India’s largest private firm. The appointment helps RIL meet a new law requiring listed companies to have at least one woman in the boardroom to boost gender diversity.

Nita, 50, took the place of Mukesh’s uncle Ramniklal H Ambani, who retired from the board at the age of 90.
The RIL board, headed by Mukesh Ambani, 57, currently has his cousins Nikhil R Meswani and Hital R Meswani. Ramniklal H Ambani, who is the elder brother of Dhirubhai H Ambani, the late founder chairman of the company and father of Mukesh, was the other director from the promoter family. P M S Prasad and P K Kapil are the only non-family executive directors on the company board.

“Nita has been engaged in several initiatives that have strengthened Reliance, right from building the world-class township and the ecological development at Jamnagar, next-generation office campuses, designing customer touch points of Reliance Retail, healthcare initiatives, successfully setting up and running institutions such as Dhirubhai Ambani International School and Mumbai Indians to, most importantly, managing Reliance Foundation,” Mukesh Ambani said on the appointment.

Nita Ambani is a board member of Reliance Industries and East India Hotels, and leads the cricket team, Mumbai Indians, in the Indian Premier League. She is also the Founder and Chairperson of Dhirubhai Ambani International School, one of India’s best international schools. In 2015, Nita Ambani founded an organization called Football Sports Development Limited, which focuses on developing sports in India through grassroots programs.