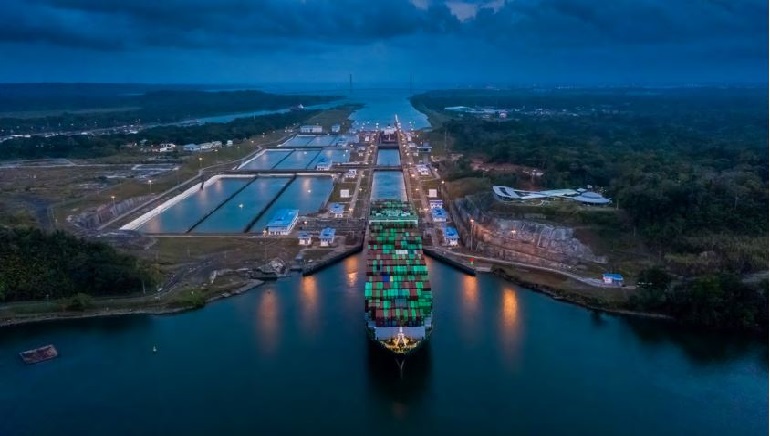 THE COUNTRY THAT EMERGED FROM THE SEA TO CHANGE THE WORLD FOREVER!

Panama is located in the very center of the American continent. Thanks to the emergence from the waters of this strip of land who later called Panama three million years ago, the union of the whole American continent was possible making Panama an important pathway for the biodiversity of flora and fauna from the North to the South. From that moment, Panama was destined to be a BRIDGE, a bridge of union for the whole world. That is why we have been crowned by the phrase “The Hub of the Americas”

By Her Excellency Ms. Yasiel A. Burillo R., Ambassador of the Republic of Panama to India

PANAMA, THE HUB OF THE AMERICA

Being a logistics hub for the world requires not only the privilege of being in a perfect geographical position gifted by nature but demands onwards by their leaders a longlasting strong logistic strategy and a practical infrastructure with diverse transportation channels.

The famous Panama Canal cataloged one of the 7 Wonders of Engineering in the World is one of them. This inventive and majestic work has shortened the maritime distances, ships all over the world transit the canal in less than 24 hours. The Panama Canal is a symbol of global trade, through which flows 5% of all the world’s goods. Each year, over a million people visit the canal and can witness this engineering marvel at work and much more. In 2009, Panama leaded one of the most ambitious megaprojects in the world, the expansion of the canal with a new third lock. Since its inauguration on June 26, 2016, the Expanded Canal not only exceeded traffic expectations but also reaffirmed its environmental leadership in the maritime industry, prioritizing water savings and contributing to the reduction of CO2, being a shorter route, and offering greater cargo capacity to its customers.

To achieve cargo transportation excellence, Panama handled the largest volume of cargo containers in Latin America and the Caribbean, and our world-class ports system handled a volume of 7.3M TEUs in 2019. Complementing this Maritime Infrastructure, we count on the first interoceanic train: Panama Railway Company that serves as a dry canal moving containers at land level connecting the Atlantic to the Pacific.

The connection is our strength that is why we also take it at the air level. Panama has more than 34 countries’ destinations and 90 connections throughout America thanks to the extension of terminals on the Tocumen International Airport. With so much movement we must have a free zone for the capacity of our trade, being the Colon Free Zone the second-largest duty-free in the world. But Panama is much more than being a place of Connections, is just because of this that Business and Investment locate Panama on the spot. With a Political, Economic, and having a dollarized economy with almost no inflation since 1904, this has helped Panama achieve solid financial stability, backed by a well-developed and long-established international banking center with over 60+ licensed international banks. Panama counts with a great portfolio of attractive regimens and laws for investment. More than 170 multinational headquarters companies had already trusted in Panama and the World Bank, and the World Economic Forum have forecast a growth in Panama for 2021 of 10% to 12%.

PANAMA: A MUST STOP FOR ANY TOURIST

Besides Commerce and Investments Panama means also fun! Why choose one ocean, when in Panama, you can experience two? Plus, not only will you find over 3,000 kilometers of coastline along both sides of the mainland, but Panama is also famous for beautiful beaches and over 1,400 tropical islands featuring stunning scenes that you may have thought only existed in postcards. Also, we have the second biggest reef in the Oriental Pacific, perfect for whale watching, diving, and snorkeling. But counting with these resources gave us a responsibility on conservation, and already this year we raised the protection of our marine areas to 30% – 2nd Latin American nation to achieve this within the framework of the UN’s 30×30 Initiative. Panama accommodates huge tropical forest national parks ideal for observation, birdwatching, and a lot of adventures. To start, Panama has more bird species and plants than North America; this incredibly rich biodiversity—incorporated with the fact that Panama is the most forested country in Central America at 63% coverage—has made the tropical rainforests of Panama the most researched in the world. The Smithsonian has been studying the tropical biology of the area for over 100 years. And, you can come to see it, too! The most valuable coffee in the world, the awarded and famous “Geisha Coffee” comes from one of these natural fields.

Panama is also a Cosmopolitan Country, a fusion of different cultures. Because of our connection to history and the titanic construction of the Panama Canal, a lot of people have passed through Panama and decided to stay. Panama City is the most cosmopolitan capital in Central America and a must-visit for any traveler in the area. The capital of Panama is 3 cities in one, with a historic district, a rebuilt district, and very modern areas. In the historic district experience the historical, charming and vibrant neighborhood of Casco Antiguo. Casco Antiguo, also known as Casco Viejo, or the ‘old quarter,” is Panama City’s historic district. Considered a UNESCO Cultural World Heritage Site, the district dates back to 1673, and features vibrant plazas and picturesque brick-paved streets surrounded by colorful buildings. The area is ideal for walking, discovering history and enjoying a variety of fine cuisine. Come for some of the city’s best gastronomy, culture and photo shots, and stay to mingle with the locals in the heart of the nightlife scene. Panama city is a vibrant and dynamic urban center and truly a cosmopolitan city in the middle of the tropics, so expect to see massive skyscrapers surrounded by breathtaking nature. Panama is a peaceful country that welcomes tourists from all over the world. Security is another important competitive advantage that Panama offers over most of the other countries in the region. According to the Global Peace Index of 2020, Panama is the fourth safest country in Latin America. We have the privilege of being a country with a stable climate through all the year and one of the three carbon negative countries in the world (Source: the second biennial update report).

From the most researched tropical rainforest in the world; to breathtaking beaches; to a modern, skyscraperfilled Business District and a huge logistic hub. Therefore, the founders of this nation had the great vision and proclaimed on the national shield the motto of our country: For the benefit of the World