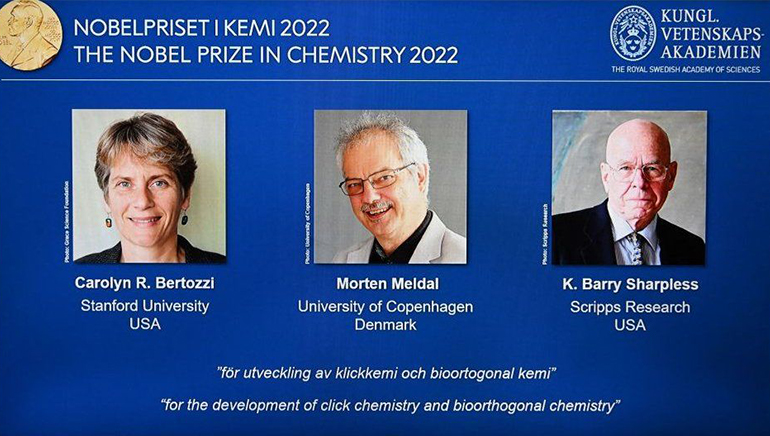 The Royal Swedish Academy of Sciences has jointly awarded the 2022 Nobel Prize in Chemistry to Carolyn R. Bertozzi, Morten Meldal, and K. Barry Sharpless “for the development of click chemistry and bioorthogonal chemistry.”

The trio has been awarded for their work in ‘click chemistry’, in which molecules snap together quickly and firmly, without the need for a lengthy and complex process and too many unnecessary byproducts. Their work has applications in medical science, including the treatment of cancer. Bertozzi is based at Stanford University in California, Sharpless with Scripps Research, California, and Meldal at the University of Copenhagen, Denmark.

Barry Sharpless and Morten Meldal won the Nobel Prize in Chemistry 2022 because they introduced chemistry into the age of functionalism, incepted click chemistry, and worked extensively on it. They share the prize with Carolyn Bertozzi, who brought an unexpected development of click chemistry and began using it to map cells. Her bioorthogonal reactions (a term she coined) are now helping in more targeted cancer treatments, among many other applications.

The Nobel prizes carry a cash award of 10 million Swedish kronor (nearly $900,000) and will be handed out on December 10.

The Nobel award for literature will be announced on Thursday, the peace prize on Friday, and the economics award on Monday.